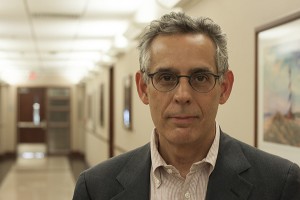 Jeffrey Aubé, PhD, has traded Kansas blue for Carolina blue and joined the UNC Eshelman School of Pharmacy as a Fred Eshelman Distinguished Professor in the School’s Division of Chemical Biology and Medicinal Chemistry.

“Jeff Aubé is an extraordinarily accomplished scientist with an international reputation for conducting ground-breaking research,” says Dean Bob Blouin, Pharm.D. “He is an outstanding educator, a consensus builder and a charismatic leader in the professional world of the pharmaceutical sciences.”

One of his group’s signature accomplishments is the discovery of the intramolecular Schmidt reaction of alkyl azides, which continues to have practical utility and evolving theoretical interest, he says. His lab also devised variations of the process, including intermolecular versions of simple alkyl, “in situ tethering” of hydroxyalkyl azides, an asymmetric version, and domino variations.

“I’ve long admired the combination of academic excellence and commitment to drug discovery at UNC,” Aubé says. “I hope that we will be able to contribute in a small way to continuing this tradition by bringing our own programs in chemical biology, drug discovery. and basic organic chemistry to Carolina.”

Aubé is also a member of the School’s Center for Integrative Chemical Biology and Drug Discovery and the Lineberger Comprehensive Cancer Center.

As a professor at the University of Kansas, Aubé served as the director of Chemical Methodologies and Library Development Center and Specialized Chemistry Center. From 2003 to 2005, he served as interim chair of the Department of Medicinal Chemistry.

Aubé received his PhD in chemistry from Duke University in 1984 and then completed an NIH postdoctoral fellowship at Yale University. He began teaching at the University of Kansas as an assistant professor in 1986.

Endowed professorships created by alumni and friends help the School attract and retain outstanding teachers and scientists like Jeff Aubé. If you would like to learn more about funding an endowed professorship, contact the School’s Office of Advancement at 919-966-1929.