Robert McGinty, M.D., Ph.D., an assistant professor in the Division of Chemical Biology and Medicinal Chemistry at the UNC Eshelman School of Pharmacy, has been selected as a 2017 Searle Scholar. He is the first Searle Scholar named at the University of North Carolina in the past 10 years.

The Searle Scholars Program named 15 scientists as Searle Scholars for 2017. Recipients are awarded $300,000 in flexible funding to support their work over the next three years. 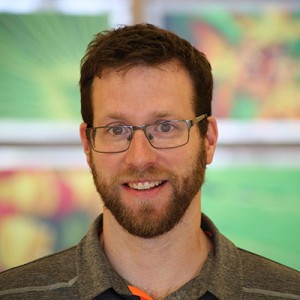 The Searle Scholars Program makes grants to selected universities and research centers to support the independent research of exceptional young faculty in the biomedical sciences and chemistry who have recently been appointed as assistant professors on a tenure-track appointment. An advisory board of eminent scientists chooses the scholars based on rigorous standards to find the most creative talent pursuing an academic research career. This year, 196 applications were considered from nominations by 143 universities and research institutions.

McGinty studies the mechanisms governing epigenetic signaling at the nucleosome and chromatin levels. Nucleosomes are a basic unit of DNA packaging in cells, and nucleosomes form chromatin, the material that makes up chromosomes. He uses protein chemistry to reconstitute “designer” nucleosomes and chromatin containing defined patterns of post-translational modifications.

When paired with structural biology, including X-ray crystallography and single particle cryo-EM, McGinty is able to explore the mechanisms governing specific epigenetic signaling pathways at atomic resolution. Epigenetic pathways allow an organism to develop many different types of cells with identical DNA sequences using heritable information not encoded in the DNA itself. These epigenetic pathways are commonly disrupted in cancer and other diseases. In the School’s Center for Integrative Chemical Biology and Drug Discovery, he plans to leverage his structural studies toward the design of small molecules to manipulate chromatin-signaling pathways for basic research and therapeutic goals.

McGinty joined the UNC Eshelman School of Pharmacy as assistant professor in July 2016. He received his M.D. from Weill Cornell Medical College and Ph.D. from Rockefeller University in New York City and carried out postdoctoral research at Pennsylvania State University. McGinty is the associate director of structural biology in the Center for Integrative Chemical Biology and Drug Discovery, an associate member of the UNC Lineberger Comprehensive Cancer Center and an affiliate faculty member of the Department of Biochemistry and Biophysics at the UNC School of Medicine.

“The new class of Searle Scholars is truly outstanding. Our scientific advisory board members remarked that the selection process this year was the most difficult ever because there were so many meritorious applicants,” said Douglas Fambrough, Ph.D., scientific director. “The new scholars are pursuing fundamental research in chemistry and the biomedical sciences—from determining molecular structures to working out the neuronal circuitry underlying various behaviors. All of these scholars have chosen to take on risky projects that, if successful, will have great impact upon their fields and, in many cases, contribute directly to the betterment of human health.”

Since 1981, 587 scientists have been named Searle Scholars. Including this year, the program has awarded more than $129 million.

Robert McGinty, Ph.D., M.D., is the first Searle Scholar at the University of North Carolina in 10 years.